I’ve been thinking quite a lot of past memories recently.  The remembrances are so very profound but difficult to put the feelings that go with those memories into words that reflect the reality i feel.
I came across the picture of an old saltcellar the other day.  I didn’t even know it was a saltcellar until i read more about it.  I thought it was just some kind of trinket box, because my granny had one in which she kept sewing notions.  I remember it looking very much like this. 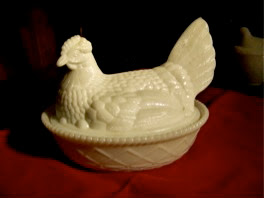 I also didn’t know what a “saltcellar” meant.  I guess (from reading on it), salt used to be kept in a dish and spooned out, like we do with sugar.  In fact, from reading about it, i realized that all those small spoons people collect might have originated as salt spoons to go with the saltcellars.
With the advent of “anti-caking salt” (the 50s are mentioned), people began using saltshakers instead of saltcellars. Of course, people collect all the weird saltshakers from that time, too.  So saltcellars became a thing of the past and people have used them for different purposes.  I don’t know why that hen with the notions is such a strong memory for me.  Granny didn’t have many decorative or fancy things, so i guess that one stands out.
In thinking about that set of grandparents, i also remember a small angel i used to have.
None of my grandparents had much money and they had a lot of grandchildren (mother is from 1 1 children, daddy from 8).  One Christmas, i was given a small angel.  I think she was from a set of 3 or 4 that was divided among several of the grandchildren.  I kept her for years and years.  I don’t know what happened to her, but my ex got rid of a lot of my things, and a roommate absconded with all my Christmas ornaments i’d treasured over the years, so the angel probably was in one of those sets.
She seemed to be a combination of these pictures: 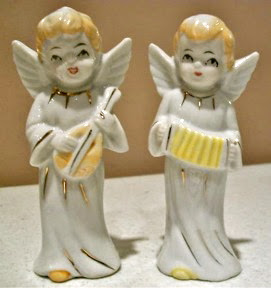 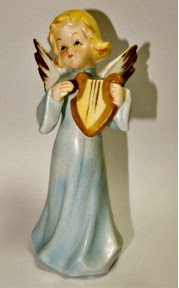 She had wings growing right out of her neck.  I didn’t think how odd that was at the time.  She was dressed in pale blue and her dress was straight and flowing rather than the full, fluffy dresses many of the angels at that time wore. She was holding a lyre.  She was probably 3 or 4 inches tall.
I miss her, of course, but i’m not heartbroken or anything.  She was simply a tangible reminder of days past.
470
Posted by Kathryn at 09:50 4 comments:

How can the year be passing so quickly?
I’ve been struggling with a number of things that i haven’t wanted to record.
But i’ve been doing a lot of other things, too.  I’ve been working on a lace scarf of which i’m very proud.  It is knit on size 0 needles and took 778 rows to complete.  I’m now working on a tam to match.  I’ll post pics of it at a later date.
I’ve been reading.
Right now i’m going thru Harry Potter again, but have also been reading Wheat Belly by Dr. William Davis and The Mood Cure by Julia Ross.
Duane and i have been listening to Wheat Belly during our commute to OC every week.  However, as much as i believe in the book, i have to warn anyone that it tends to be very technical/scientific.  We like it quite a lot, but i feel limited in the folks to whom i would recommend.  Of course, reading it is easier to skim that listening to it read.
We wrote Dr. Davis about the difficulty and suggested he write a simpler companion book.  We also suggested a different title, as the folks we've recommended to read the book seem to be a bit offended with the title.  He wrote back a very nice reply and finished with:

" . . . I hear you on the simplified version. A Wheat Belly for Dummies? Hmmm. Two insults in one!"

We enjoyed this very much.  :)
The Mood Cure is excellent, too. I’ve been blessed to not have to deal with depression issues (beyond “normal” daily life type things) for many years.  The pull out of depression began when i changed my diet.  But this book deals with much more.  She goes into amino acids that help and her clinic uses and has found most people do not need drugs if they get the right supplements and healthy diet.  I have to say that i’ve read a number of health/diet books over the years.  Most are excellent, but i only agree with 80-90% of their recommendation.  Ms. Ross’ book is the first that i’ve read where i think the diet recommendations are right on target.
I’ve also found a doctor/clinic i think i can work with.  I’m not very hopeful that i will actually improve, but it is a relief to at least have a resource to use.  I have been using their nutritionist and doing the hCG diet again, but i’m finding this round much, much harder.  I’d hoped doing the diet with a nutritionist to make it a bit easier, but that hasn’t really worked out so well.
So, in a nutshell, that is a bit of what i’ve been doing.  I’ve also been thinking a lot about memories and will probably be writing about some of them.
469
Posted by Kathryn at 09:50 1 comment: