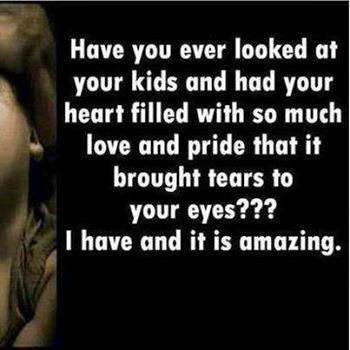 I look at your kids and wonder, "Where the heck is mine?"

Family was up over 4th of July (not at our house, Duane's uncle's place).  I went over to hang out.  Hilary is a year older than our Kaylee would be, and Lincoln is 2 months older (his parents were married the week after we were).  It is getting harder to be with them as time goes by.  I wonder what she would be like.  I don't fit in with any of the mamas.

The above pic to me is simply bragging.  I don't have as much a hard time with pics of the kids and news of their accomplishments as i do with these canned things.  ("If your daughter/son/husband/sister/brother/cousin/mother/father etc. is the best thing in your life, repost this.")  I've told Duane he won't see me reposting these things for i know too many people who want to be just where i am - in a healthy relationship with someone who loves them.  I won't brag about that.

I will sometimes be thankful for him.  I think it is different.  I could be wrong.  But again, it isn't pics of the kids and stories about their lives that makes me feel a little nuts.  It is these bragging reposts that someone else created that sometimes make it hard for me to not scream.

Friday is the EEG (sleep deprived).  I've not gotten a letter from DMV taking my license yet.  I'm very careful and limited when i drive.  I won't drive if i feel unwell, or haven't had enough water or outside a 10 mile radius.  It is kind of limiting, but i'd much rather be safe than sorry.

Life has been very frustrating for a while now.  I'm seeing my functioning - my ability to work, to do gardening, cooking, housework, socialization, driving, most anything, go down and down and down.  What i find to be really surprising is i can FEEL that i AM healthy, that i have energy, that life doesn't have to be this way.  I can actually feel the potential energy stored in my muscles and wanting to be used.  But somehow i can't access it.  If i try to push myself to force that energy, it won't be tapped, i'll just be worn out and take days to recover. It feels like i've something unplugged/disconnected somewhere, and if i could only find that and plug in, i'd be as active, healthy, and able as anyone my age, maybe more so.  I've been trying to push the docs to help me find that disconnection and figure out how to make me functional again.

I've had two seizures - last October and in April.  I was able to keep them fairly under control with keeping hydrated when i realized that dehydration was the key.  I mostly self-treated and was very careful what i told medical professionals.  Then, the end of June i had a couple more seizures.  After the first one i was not able to hold down food/water and realizing that put me at risk, i went to ER for hydration.  Got put inpatient and dealt with a doc of whom, frankly i cannot have a lower opinion.  Waste of money and time.

Both the other docs i've used strongly felt i needed a neurology consult, but were not able to implement it.  Totally useless in helping me to get the consult i needed.  (And i'm irritated more than i can say that an EEG was not done while i was inpatient.)

So Duane drove me down.  We were both favorably impressed with him.  He was surprised that i don't want meds, but he didn't seem to be offended by it.  Said he's not run across it before.  He indicated he DOES think it is possible i have Diabetes Insipidus.  (The hospital doc stated i "can't possibly" have DI because my sodium levels are normal, which makes no sense to me.  I can't even find reference to sodium levels in the literature.)  This doc seemed quite surprised by that statement, too.  But when he mentioned meds for DI, i mentioned the contraindications - 1. seizures, 2. migraines, 3. kidney problems, and he quite understood why i wasn't interested.

So the next step is to get an EEG.  I've an appt for 1 August.  Yep.  Not a concern on their part, obviously.  We won't have any ideas until that is done, except i need to work very hard at staying hydrated.  It is getting harder as it is taking more water every day to keep me okay.

And i'm going to lose my driver's license.  This doc said DMV is not real swift on that.  I will almost certainly lose it for a minimum of three months, but they may not notify me for a while.  I've already limited my driving quite a lot.  This is going to make life very difficult for a while, but it is what it is.  Frankly, tho of course i'm irritated about it i would be much more angry with DMV NOT limiting someone having seizures.  I'm trying to prepare my self mentally for how difficult i will find it to be.

So, for now no answers, and no idea which direction to head for answers.  I'm more than a bit impatient with both Connealy and Ruelas for giving me no additional support.  I quite understand that to some degree they would be working blindly, but i still believe there are support measures (IV Vitamin C and glutathione and other things) that could help slow my loss of functioning, possibly help me maintain better, even if we don't know the exact reason for the losses.

When all is said and done and i, hopefully, do have answers i may re-evaluate where i want my $$ to go - whether i've made the best choice in docs who can be helpful.