I knew i was more limited this year than i was even last year, but didn't realize how much until today. I got thru the music, but spent the next 1-1/2 hours deeply coughing.

I wish i could post the pics i took of the kids. They turned out just precious. I stood them in front of one of the stained glass windows & snapped the pics with flash. Without flash they were just silhouettes. These turned out delightful, however. (Isn't digital wonderful!?!) They did a picture frame craft today & those pics will be put in the frames for the kids to take home. But i've real issues about posting pics of kids that are not mine without permission.

This is the window i posed them in front of for the pics. 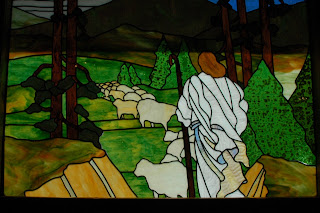 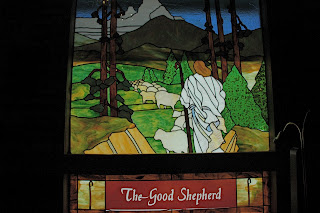 About my post yesterday: I know my dear friend loves me no matter what. I had discussed it some with him thru his visit. With people i trust i do talk about it. But frankly, i find it very humbling & sometimes humiliating for folks to actually "see" me when i can't function. I haven't much left, but i guess i do have some pride in the fact that usually i "look normal" & most folks don't know how limited i am.

And this is the reason: Today at church for the VBS i was not able to "look normal." Beyond coughing (& sounding like i was about to die) i had to lie down & rest on & off for much of the AM. And so, folks i don't know very well & don't trust much now know. I'm not saying that of all the folks in my church. Some i do trust enough to tell, but they are a select few & in general i'd prefer to continue appearing normal.

But today that wasn't an option & i had to give some explanation.

And so, i got a lecture from one lady on how i need to find a doctor who can treat me & to "pray the scripture promises," & "not doubt that God will heal you" etc., etc. She said several times, "God doesn't want you to be sick." ??? Excuse me, that implication is that i'm not doing something right here. I'm sick because i don't have enough faith.

Sorry, i've been thru this multiple times before. I'm not going to listen to such twaddle. I've heard her opinions enough to know i don't trust her very much, but i found this very disturbing. I told her that God tells us that he uses our weaknesses to show his glory & power, but she brushed that aside & told me God doesn't want me sick.

I was angry about it at first, but now, frankly, i'm just crying. I guess this is unresolved for me & she really hit a nerve.

But, before this happened, i'd gone outside (to cough) so that i wouldn't be disturbing to the folks inside. And as i sat on the back step and looked at the blue, blue sky & the lovely green trees i was just so appreciative. I was thinking about Sara Frankl. I read her blog. She loves the Lord & praises him & writes such interesting & thought provoking things. But her health has gotten worse & worse & she is sharing more of her struggle. She doesn't like to. Like me, she would rather focus on things other than her illness & limitations. Anyway, i was thinking of her & i was just so grateful. For i can go outside & enjoy the beauty of God's earth. Sara cannot. Going outside makes her very, very ill. And she is in a great deal of pain. The pain i have is not very extreme. So i can be thankful for what i do have. And i have so much.

And i've already two people in mind to take over VBS music for me next year.

Well, I'm sure the person you spoke to meant well, but I do think she is off base. By that logic, then anyone who is ill is ill because they either haven't enough faith, or because God wishes that particular person to be ill.

I used to do a lot of work with the Starlight Foundation, which is a group that does work for chronically, and terminally ill children. I don't think God wanted them to be sick, and I really don't think they were simply lacking in enough faith to be healed.

I liked that explanation a lot.

Like I said, I'm sure the woman you spoke with meant well, and I'm equally sure that no one she loves dearly faces an ongoing illness.

I read your post (linked to at the right) detailing with what you have struggled. I can understand not wanting to trust everyone you meet. People fear illness so much, that sometimes their reactions have to do with that fear, not the person in front of them.

Like with the woman at church saying, "God doesn't want you to be sick." I think the reason she clings to that has nothing to do with you. I bet she's currently healthy, so is her family, if she can believe that has to do with the strength of her faith, then she feels safer personally, and her loved ones feel safer in her eyes.